Natasha spoke about her research on the radio show Footnotes, on their ‘conflict’ themed show.

Click here to listen to more podcasts of Footnotes at KCL Radio.

“The strongest stories are the stories of survival – and Natasha de Silva, 22, wanted to show just that in her documentary ‘Overcoming the Waves of Destruction’. So strong were they that they won her the gold award as Student Journalist of the Year given by the Broadcast Journalism Training Council (BJTC) of the United Kingdom, in October last year…” 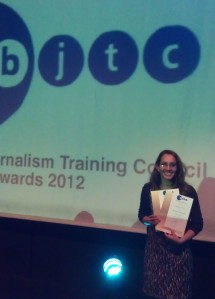 In addition she won the Best Documentary title for a documentary on the after-effect of a tsunami in her home country.

Natasha, who gained a 1st in her Journalism and Media degree this summer, interviewed survivors of the 2004 disaster to produce a radio package for her final project.”

More articles on this subject:

“A Coventry Journalism graduate who produced a documentary on the after-effect of a tsunami in her home country has been nominated for a top-reporting prize….”