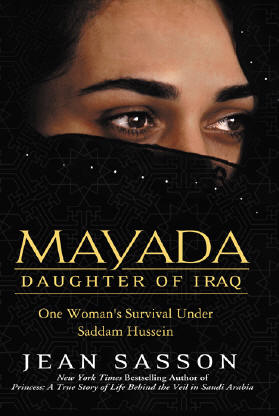 Mayada, Daughter Of Iraq: One Woman’s Survival Under Saddam Hussein

The book I have chosen to discuss for this part of the assignment is a true story about a true daughter of Iraq, Mayada Al-Askari. She was a self-reliant single mother who owned her print shop, which led to her been arrested by the government of Saddam Hussein.

She is a descendant of one of the most prestigious and honoured families in Iraq. However even her family’s well established connections didn’t keep her away from the prison’s of Saddam Hussein. One grandfather fought along side Lawrence of Arabia, the other was recognized as the first true Arab nationalist, her uncle was Iraq’s Prime Minister for 40 years and her mother was a high government official.

Having been wrongly accused of printing posters against Saddam Hussein’s government Mayada was arrested and taken to Baladiyat Prison, where she shared a tiny cell with 17 “shadow women”.

How does it present ‘the past’ or memory?

Jean Sasson has taken this approach to present the history of Iraq and the memories of Mayada.

How is power represented?

It is safe to say that this book is all about the power of a tyrant and how it changed the lives of many.

Every image used, from the stories of how Mayada’s cell mates were arrested to how they have been tortured, to the release of Mayada shows the political power that has been abused by Saddam Hussein and his followers.

There are also examples of how power has been used for good. This is depicted through Mayada’s memory of her maternal grandfather, Sati Al-Husri who used his political power and influence to establish a strong education system in Iraq.

This book also presents power in a different light. The power represented by Mayada’s cell neighbour who chanted his prayers daily even though he knew he will be tortured for it. But he did not stop because prayer gave him the power to go on.

The power represented by Mayada when she was released and moved to Jordan; with freedom came power to live her life.

The powers of each and every shadow woman of cell 52 and every Iraqi, when Saddam Hussein was defeated.

How does this story matter to me?

Being a woman with strong beliefs myself, this story matters to me because it shows the struggle a woman faced to survive. A woman who put aside the notions of her society and climbed the ladder of success as a journalist; a woman who knew when to give up her career for her safety and the safety of those she loved. She stood for what she believed and didn’t want to go against it by being a biased journalist. She was a woman who was strong enough to stand the torture she received and show dignity to her torturers. A woman who was a pillar of strength to her cellmates even though she suffered as much.